Being Free from Social Captivity

Change has come to America. Now changes are what must be understood through actuality of practice worldwide.

I don't think that it is impossible for a white person to understand the struggle of our ancestors in the past. You don’t need to experience something to feel another’s pain. How we empathize with our brothers and sisters is what makes us human. That is if we choose to remain mortal rather than falsely deify ourselves as gods.

I do think it is impossible for non-coloured people to gauge the struggle and fight to not be seen only for the colour of our skin, a day-to-day struggle. Communal pain is not a proclamation of emancipation leading to growth; it is a declaration of human vanity and selfishness, and ultimately are unwillingness to accept our uniqueness. Racism is most violent discourse because it mocks those who are already oppressed visually and then institutionalizes them based on the limitations of what it is that they are seen to contribute to society. Lawyers, crack fiends, gardeners and the teachers, we are what we do and our success is measured on that output.

What identity does is complex. The markers of our empowerment (ie/race) are similarly that of our disempowerment through “othering” ourselves. The longing of belonging allows for discrimination.

No one ever understood me, I recall from when I was young. I was born in Hammersmith, England; I was six when I moved to Canada. In the UK I was chased and always called brown bread, or Paki (though I am Indian, not Pakistani). I fell from a tree of diaspora. My parents were exiled from Africa by Idi Amin, where they left their lives and any accumulated wealth behind. They did not leave their culture. I was a product of their displacement and resiliency. Their East-Indian-African heritage made me a point of confusion as I moved around the globe. I was a Paki in England, and when I moved to Canada I was laughed at for being a British accented brown girl, that claimed to have parents from Africa. It was peculiar to Canadian children why a brown girl has such an accent back then.

I never gave into not knowing who I was because I knew where I came from, and that answer was as complicated as the person I am today. I am a leader, a friend, a poet, a writer, an actor, a comedian, a sister, a brother, a daughter, and a human being. No different than you, but they sometimes see me through a different lens though I never saw myself as they did. I am Hindu, I am Christian, I am a Jew, I am Buddhist. I am a believer in faith.

Tupac Shakur remains my inspiration as an urban poet, a most interesting storyteller. His eloquence is as sharp as his pen. He talks about what he knows, where he came from, where he went and the things that he saw, which perhaps he never wanted to see.

We all struggle to be, but it is our choice to live free of captivity.
Posted by PROVOKEMEinc at 8:14 PM No comments:

Posted by PROVOKEMEinc at 8:12 PM No comments:

Some say I am too young to carry a shoulder of such wisdom and sorrow, others call me a fool for leading a life with her hearts rule.
I try and explain that it really is all worth the pain, even all those moments when I came undone and unraveled into such despair, that I had nothing left to share but the echoes of my own deafening cries for mercy.
I have never given up on you.
I am always a bit strange, ferociously sensitive towards everything that fluently touches me to strengthen the beauty that I seek to find by the edge of the quiet water.
I know she is out there. She is my obsession. She is my salvation.
I nuzzle my dreams in her fate and feel alive with hopes of coming across her glorious embrace.
Others ask me to grow thicker skin but my skin has always been browning, transparently true of reflecting the rays of the moon and a maturing coloured womb.
No matter how alien you may seem me to be, I am a woman full of such love that it tortures me at night. I cry for you.
I jump up in hazy freight when I long for you. Words fall short of describing how much I need you.
I yearn for your gentle voice to press up on the side of my neck and tell me that we can make it together, for the feel of your lips pressed against my mind.
This is the only way that I can feel unwind.
In a rotation the pain I have inside stirs a serenity that leaves me parulized towards only you.
The truth is I dare to believe in you, because I love you.
So much more than I ever dreamt I could love, I do. 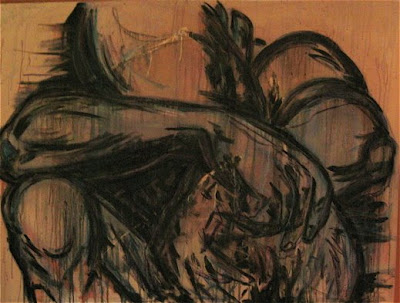 Posted by PROVOKEMEinc at 8:09 PM 2 comments:

She couldn’t resist the itch of her.
She had gotten so far into her without ever even touching her.
The rise of her thoughts fell into a crevice between her thighs. Dripping with sensation and anticipation, she stirred with heat, and felt her in the cool of the water she wore.
She knew that in her she had discovered such a complex beauty, a searcher just like herself. She just could not stop the craving to know more about her. She put her fear aside and decided to try.

She was shy at first, for how would someone so beautiful even notice a simple woman like her. As time passed, it seemed so did her craving for more, to learn more, to hear more, to write more, to touch her more. To really touch her. She imagined how it could be if the two were to be as one. She found herself in crowded rooms, full of many people and laughter, and friends, but all she could think about was her.

Her chocolate skin, her sexiness, her confidence aside, what she was truly craving for was her beautiful mind. Her impenetrable eyes, the way they lit up inside and outside. She was not afraid anymore, she knew what she wanted and nothing less or more. Could it be possible to love a stranger without ever even knowing her? She was the one who had opened the door for her.
Posted by PROVOKEMEinc at 3:23 PM 1 comment:

Crossing the Railway Tracks to Freedom

I dedicate this to all those who have lost their way, gave too much to only still have to pay. However, to one friend in particular, he knows who he is. Know that I am your sister, you are my mister and together, we will find our way away from all the brazen and damage that may have scabbed our skin. The force of our love together is set to heal one another until we achieve our highest potentials.
-----------------------------------------------------------
Life is a funny journey, and the destination always remains a mystery. 2008 was a terrible year for me on a personal level. I struggled with the grasps of depression when I lost somethings that I loved in a way that I had faithfully prayed for to come to me. When people hurt you it is never easy to get past the pain, to a smooth, flat terrain. Life is bumpy along the way; we loose so many lovers along the way. For months I sat and cried, wondering what I had done to deserve to be disposed of like a piece of rubbish in the trashcan by so many I had given the best of me. For months I struggled with understanding why they were so cold to me, and one in particular, the one whom I loved the most was telling others things that were untrue about me. I knew deep down inside she knew the truth, even if she has told herself otherwise for her own preservation.

I have seen many of my friends struggle in the past year, dealing with the loss of someone they love, and some, the loss of themselves. While some have numbed themselves with indulgences of drugs, sex, and mishandling their own worth, others have fought to find a peace of mind. We are only as foolish as we want to be. Sure pain can lead us to be blind from valuing the time we are given, and the ones that we do have around us to encourage us, pick us off the floor. However it is those who wake up and better themselves without fear that are the leaders, inspirers, the ones who I admire. These people, my friends, know who they are because I tell them how much they mean to me. We all need someone to look up to, a shoulder to rely on. To my mister at a time that is difficult for him, you are very special to me.

2009 is our time to shine, both you and I. My mister and I. Do not let anyone stand in your way of seeking the happiness that is yours to find. Roll with your ambitions, try and learn patience (I struggle with this on a daily basis), put out the energy that you seek in return. Challenge yourself in output, and maintain yourself to be aware of your input.

I have cried so many tears this past year. I almost got to a place where I was seeking to no longer be found. I almost slipped away. Now I am back and stronger then ever. So if you need a kick in the ass, a reason to move past the past, know that I am a testament towards survival. What we seek is the happiness that is in our own hands. Open your fists and set yourself free.
Posted by PROVOKEMEinc at 3:25 PM 3 comments:

I remember going to Kingswood Music Theatre to see the TLC on their CrazySexyCool tour. Alongside my best friend, Dee, we had grown to love TLC and even adapted their personas into our own lives. Dee was all about Chilli, and I was all about T-Boz, but we had love for them as a unit. We were in the second row and I remember T-Boz touching my hand while she was sitting at the edge of the stage and singing “What About Your Friends.” Lord, I admit, I even got my haircut with the two long pieces to the side, just like T-Boz (no I will never show you these pictures).
TLC remains my favourite girl group of all time. If you really think about it, they were first to nail the Girl Power concept that the Spice Girls later used to sell their albums and images. On the other hand, unlike the Spice Girls, these women were highly creative and full of sheer talent. I can still throw on TLC on any given day and I find myself bopping and singing to their smooth R & B sounds. Starting with the image they cemented for themselves on “Ooooh on the TLC Tip,” to the sexy and sultry “CrazySexyCool,” followed by the innovative sounds of “Fanmail,” to finally their sheer dedication to finish “3D” after a car accident claimed Lisa "Left Eye" Lopes in 2002. 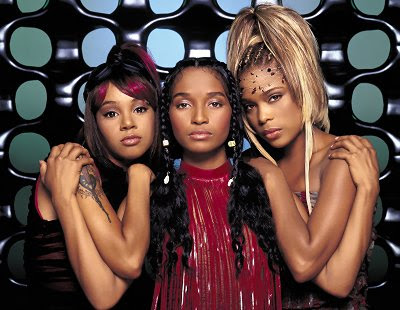 TLC remains a rarity of female group talent that has only been rivaled by the likes of En Vogue and Destiny’s Child. From TLC’s emergence in 1992 until today, these girls know how to kick their game and turn on my red light special.