My Latest Article in Xtra: "Releasing My Ghetto Courtesan"

Holler! This one is for my single ladies who don't wanna act like silly hoes, nor sell themselves short!

Click here.
Posted by PROVOKEMEinc at 3:57 PM No comments:

Here is the best song performances and the win! BROWN POWAAAAAA!!!
Posted by PROVOKEMEinc at 4:26 PM No comments:

My curse has always been that I came from the abundance of my mother’s strength. It really is unimaginable, non-fathomable how little my heart really does bend the wiser I grow, the more times I manage to place a block before the impact of the blow. I imagine that if I were weaker I would have killed myself by now, hand on heart, knife in hand, “Goodbye sweet misery,” I would romantically say- watch each drip fall with yellow acidity to the true colours of Fortunes fate. I have, with my head hung low watched those who were once my dearest of friends walk away when I needed them most, I have cried making love to a woman and felt the sensation of my happiness before my eyes, the rush of my devote sincerity trickle down with a release between my shaking thighs. I have laughed at the things that have showed me that there’s still a reason to smile, even if it is for a simple, short while. I have sat in the dark and played with my thoughts that twirl around and around in my head, concluding I was not dead, but very much alive instead. I watched my 93 year-old grandmother lay in her hospital bed and fight for her peace of mind away from the physical pain- only to watch her slip away, when I really wanted her to teach me more and stay. I have seen my father lie then cry and forgiven him for all the pain he has caused me and mine inside. I have watched my niece grow into a young woman, tall as a tree and as sensitive as the vulnerability of bark upon being kissed by the rain. I have felt so much pain, pain, pain. I have simmered down to sleep and felt only awake at the boiling stakes that play with my ever-changing Fate. I have realized that today is a beautiful day, with or without you. I will make new friends along the way, I will see a woman and feel the erratic heartbeat skip at a pace of a most beautiful love-song, I will continue to forgive my father and I will cry when I loose someone I love, again and again. I am human, as human as can be. I am my mother’s child.
I am here before you, for you to see me set myself afloat, march in revolt to my own stubborn ways, wash away the blackened tears of past moments that have gone away, to motivate myself to stay positive and continue doing it my way. Her way.
Posted by PROVOKEMEinc at 5:50 PM No comments:

I realize how much I have to be grateful for. If I take things for granted it's only cause I am suffering from some immediate obstacle that hurts me. I learn, I grow stronger with conviction and accepting I just need to try. What is there to lose but time, and time is not on our side long, it is at are fingertips for only a second. What I will do with my time is be thankful, remember the things that have made me feel as though I were alive in that moment, and still now, though it can grow complicated. A human heart is wax and only melts at a stroke that is kindred of itself. To see friends look at her and believe in her. Make sure she has something to say, because they actually are listening to her with the hope to hear.
She is never to lost to forget that you are here for her to grow fond of, to drink red wine with her, to make laughter with her, to allow an exchange of thoughts through processing with her. To share with her the most intimate secrets under her pillow and in her fears.
I have found friends, I have found each and one of them with my own hopes of what it is that I believe is a friend. So here I am, appreciative that even if the walls of my room seem to keep me contained from the outside, they will always keep me connected to the commitment of our together journey back home.
She picks up the mic. Her moment has come. She is scared but they are there. Their eyes are on her. At first she was wobbly with insecurity, but the moment is so temporary that she knows that her time has come. Words to a heart-earned moment.
So many come together to understand and relate to cure their loneliness. They heal her without even knowing it. She has somewhere she can hide her ridiculous thoughts of belonging happily, of everybody belonging.
Posted by PROVOKEMEinc at 12:03 AM 1 comment:

Cover of Xtra-Me and Ma Girls! 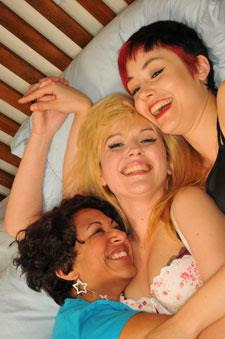 Cheers to a wicked experience with some wicked people!Catch this cover on Xtra stands out now! YAY!
Posted by PROVOKEMEinc at 11:06 PM No comments:

Mirabai is perhaps the most celebrated Indian female poet and singer of the 15th and 16th century. Mirabai (Meera) was born into the Rajput aristocracy and from an early age she was devote worshiper of Lord Krishna. Mirabai was raised in a sect of mystical Hinduism that is called Bhakti. The Bhakti tradition dictated that pure love was the only way to achieve alignment with one’s god, without the restriction of caste, gender or colour, which were still very visible in marking the path of existence in Indian society at large.

The followers of Bhakti had to give up their families and their worldly lives to wander as teachers of this spiritualism and this thought process, as did Mirabai. She quickly gained the ear of many and soon the formation of communities sprung with like-minded individuals. Mira was a most transformative artist and spiritual enlightener as a woman of her time. Firstly, Hinduism was a polytheistic society and consisted of the worship of multiple deities. Mira however, kept to her strict devotion of Krishna alone. She overtly shared conversations with Krishna through the creation of poetry and music that she preached to the masses. Furthermore in order to practice Bhakti one was also expected to live with people outside of your particular caste system. This thought of unification beyond religion and poverty lines was radical and near invisible at the time. The forbidden was very much driven by the rules of the upper classes. This melted into a reality of charity and humbleness fueled Mira to spread her unwavering message of love of all as equals. The thought of being momentarily subversive was seen as a stepping-stone that would eventually elevate a person to be revered.

In 1516 Mira was married to Prince Bhoj Raj of the Rajput kingdom of Mewar, the most powerful Rajput state in the early 16th century. From the start Mirabai was a problem with her unique way of living and thinking which was in conflict with all realms of monarchial notions. She refused to worship her husband's family's goddess (Devi), claiming that she already had offered herself to Lord Krishna and considered herself married to him, she refused the family's gifts of silks and jewel and insisting on associating with the community of Bhaktas (those who practiced Bhakti). Bhoj Raj died after only three short years after they were married, and as a final act of rebellion against compromising her dedication to Krishna and Bhakti religion, Mirabai refused to join him on his funeral pyre. This was a practice at the time expected of high caste Rajput widows, but instead she claimed that now she was free to devote herself completely to the worship of Krishna. 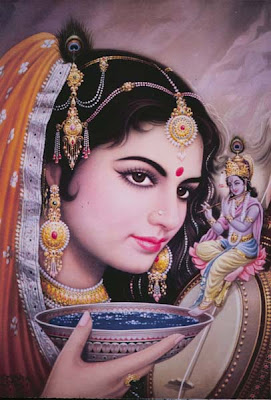 Mira's devotional practices became increasingly intense and it began to harbour the attention of individuals of all social groups and caste systems. She was seen to often sing and dance herself into ecstasies in public places like temples while singing bhajans (religious songs). Mirabai returned once briefly to her family home, but in the face of further family harassment decided to leave the kingdom of Chittor (the capital of the Rajput kingdom) indefinitely. She passed her last days in Dwarka on the coast of the Arabian sea. This was believed to be the site where Krishna dwelled in his youth.

Mirabai’s life and courage resonates in the hearts of many in India today for a multitude of reasons. First there are her words, which with beauty and joy express a kind of female liberation that seemed irreversible to the push of the set politics and minds that were of the ruling class mindset. Through her provocative arts and teachings she rejected the temptation of wealth and living within the lap of luxury to gain the affection and attention of the poor. Beyond her creation of work there is also the evolution of the Indian woman through her literal body. Mira was a childless woman who succeeded in captivating value outside the typical role of mother, which was revered in Indian women above all else.

I have found, yes, I have found the wealth of the Divine Name's gem.
My true guru gave me a priceless thing.
With his grace, I accepted it.
I found the capital of my several births;
I have lost the whole rest of the world.
No one can spend it, no one can steal it.
Day by day it increases one and a quarter times.
On the boat of truth, the boatman was my true guru.
I came across the ocean of existence.
Mira's Lord is the Mountain-Holder,
the suave lover, of whom I merrily, merrily sing.

Here I am today, I am ready to create, meditate and not precipitate. Rain on me the disappointments past; I will not let them sewage my spiritual ebbs and flows of a future full of glow. Those who have been unsettled by the affection I generate, I will not hate but forgive for their need to be gone to me. I will not allow another to bury my freedom, which has finally come to me with maturity and within my immediate attention. My soul will soar to a level where it can gravitate from all the things that have eluded me, confused me, moved away from me, so far away from me. I have seen someone so broken and blue, fall from happiness to let only hurt exude. I have seen someone open a hand to kin, only to be pushed away and condemned for caring without prejudice of sin. It is quick to stretch your arm to point at another in accusation, but it seems to be second nature to all the same, hold that arm out and protect another from the mishaps of pain. I am telling you, I am as wise as an old owl, love and love alone so that you can fall away from the murky solitude that leaves you and I, him and her, us to believe that we are alone. The only way to reach a plateau of honest desire is to make it through the shadows and through the smoke of the fire. The sight of love alone. Love fearlessly, love as though you were unbreakable. If you snap, retract and bounce back.
Posted by PROVOKEMEinc at 4:04 PM 1 comment: