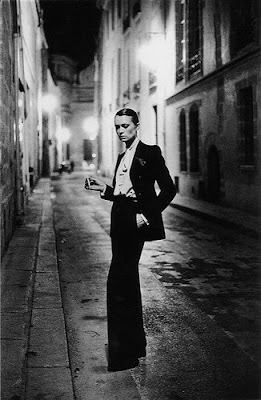 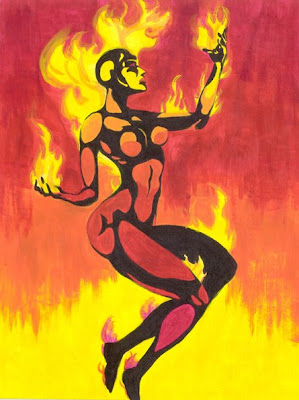 I watch her lips move as if from every word she spoke, a drip of my desire falls down the side of her soft cheek. I try to concentrate but I am taken by her natural beauty. I have a hard time trying to deny that everytime she looks at me, my stomach repeats the pattern of feeling a burst of wild butterflies escaping freely. I am picturing her dancing naked in a ring of fire. I'm burning up and I like it, each and every burn. I hesitate on my words...usually I'm the master of my own tongue. She has me tongue tied, twisted like a devoted servant is to a wicked master. I try to go back to my work but in my mind thoughts of her run like a diesel engine pumping in and out, releasing steam. What a beautiful release she has given me.
Posted by PROVOKEMEinc at 12:21 PM No comments:

Ahhhhhhhhhhhhhhhhhhhhh! This is one of my fave songs! I remember when this song came out, I had gone back to to UK for a visit. I came back obsessed with this song and Gabrielle's "Dreams" HOLLER!! 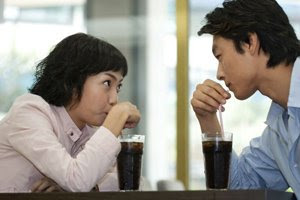 To date or to not date, that is the question?

Dating can be a very stressful process if you take it too seriously. Often it seems that people overshadow the experience of having fun and meeting new people by becoming consumed by the notion of finding 'the one' to fill the void.

Let's face it, we all have to kiss many beasts before we find true beauty. The important thing to remember when dating is that you have the power to choose! If you begin to notice things that irritate you or turn you off of someone, I suggest you don't waste your time. There are plenty of fish in the sea, so don't allow dating to become a frustrating process. Dating is all about YOU having fun, learning more about what you desire and find attractive in a companion.

Don't get discouraged by the amount of schmuks you'll meet on the journey who'll make you wanna rip your hair out! Keep faith and have fun! As Madonna says 'don't go for second best, put your love to the test!' Keep a positive attitude and remember that you need to find someone worthy of your love and attention.
Posted by PROVOKEMEinc at 11:24 AM 3 comments: 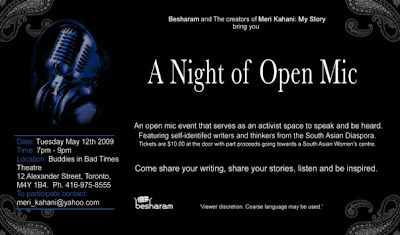 Yours truly, alongside Toronto's finest East Indian talent will be coming together to make your mind feel like a fresh cup of chai. The last installment was a great success at the Toronto Womans Bookstore, so come get your freaky think on!!

Xxo
Posted by PROVOKEMEinc at 12:08 PM No comments:

I love me some P!nk!! She is the sexiest tom boy in the universe!!! It also helps that she can rip the roof off with that firey Aries voice -- SING!!
Posted by PROVOKEMEinc at 9:54 PM 1 comment:

Paranormal State & Signs from Beyond

So my latest TV obsession is Paranormal State. For those who are skeptics, those of you who are non-believers, if this show doesn't change your perception then nothing will. I have always believed in ghosts, I have seen possession with my own eyes and heard stories from my friends about being haunted, these vary from regularly to sightings.

Possession is a unique circumstance and once you have seen it, it is hard to forget it. I think those who are pious and pure in vessel are the most susceptible to channel this kind of a force within themselves, willingly or unwillingly.

I think the misconception about ghosts is that they are evil and out to harm, when in fact they are just attached to the idea of being alive, or being around those who are sill alive. While evil does exist in life, it also does in death. I do think that when you die, your spirit stays within the carnation of what it was when you last lived; if you were evil, your spirit will also linger in evil. For whatever the reasons are, some spirits don't cross-over, whether they feel protective of their previous homes, or they feel connected to someone that is currently residing there.

I think it is to narrow-minded to rule out that your spirit doesn't have carnation beyond death. If you have faith and hope in change, I think it's feasible that you accept that forces that are larger than us, or that we can't see with our eyes can exist.

I also believe in demons, much like we battle our own demons on a personal level, I think that non-tangible demons are a creation of thousands of years of history and an accumulation of negative acts, thoughts, beliefs and manifestations across cultures. Demons show themselves in the manner of being aware of what you fear, much like being aware of our insecurities. More often than not, religion and religious iconography challenge these forces because they represent the faith of the living. Thus religiously sanctioned practitioners and emblems of faith challenge these demonic existences. Whether you are Christian, Hindu or Chinese, all cultures use the faith of their religious or spiritual practitioners to challenge the unseen forces of evil.

I leave you with an episode of Paranormal State that deals with demonic possession, and even leads into a full exorcism. If this catches your attention, you will be interested to know that there is a Return of Six episode that follows. Remember that believing does not always mean seeing.

Posted by PROVOKEMEinc at 1:12 PM No comments: